If you live in Darwin, you will know that there is a lot of activity going on at the moment about our iconic dish of Laksa. How did this dish originating in Malaysia and South East Asia become one of the iconic foods of Darwin? So many questions,  many relating to our climate, multicultural population and how. yummy it is.

the plants in your garden at home. For the Darwin Laksa festival, Dan Brown from Down to Earth Gardens has made a Laksa garden, complete with live plants 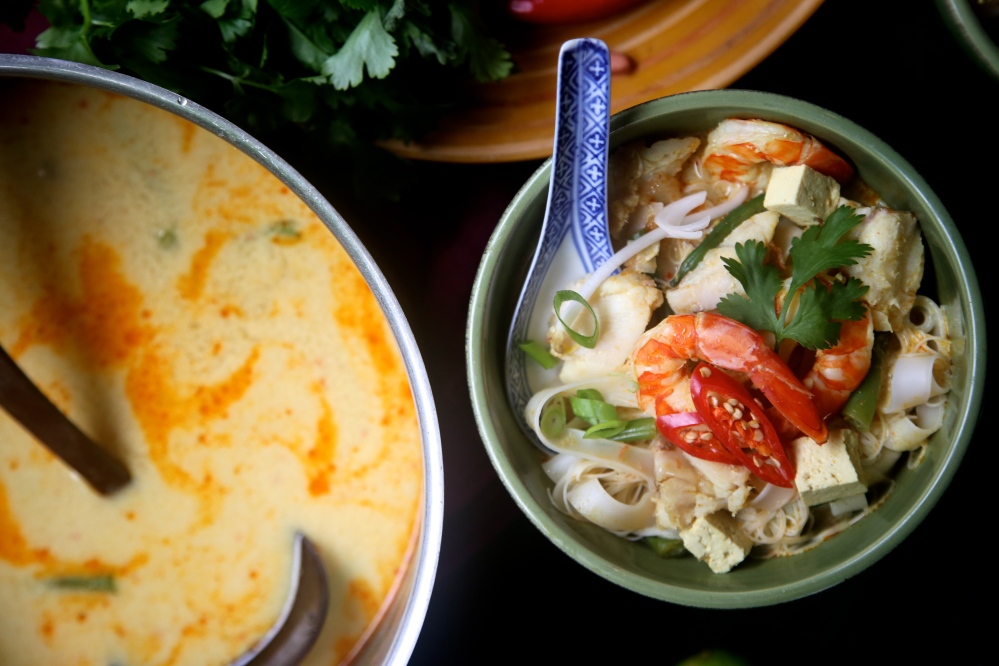 Chilli (Capsicum frutescens) is a shrubby plant originating from Central and South America and grown in many different varieties. Chillies are in the Nightshade (Solanaceae) family along with tomatoes and potatoes. Many varieties grow really well all year round in Darwin and can stay planted for several years and still produce fruit. Some varieties do much better than others, including bird’s eye chillies which are extremely hot, and so hardy that it needs very little love.

No Laksa is really complete without chilli and gives it that hot mouth tingling kick; that kick comes from Capsaicin, the main bioactive plant compound in chili peppers. This binds with pain receptors, which are nerve endings that sense pain. This induces a burning sensation but does not cause any real burning injuries. Many humans associate the eating of spicy food with pleasure as there is also a pain stimulated release of endorphins; this release of endorphins locally make chilli also an effective pain reliever.

Columbus sailed to the Americas from Europe in 1492; which marked the start of the movement of plants around the world via sailing ships and explorers, this included the domestication and then exchange of many chilli varieties across the world; including to South- East Asia, where today we could not imagine cuisine without them. 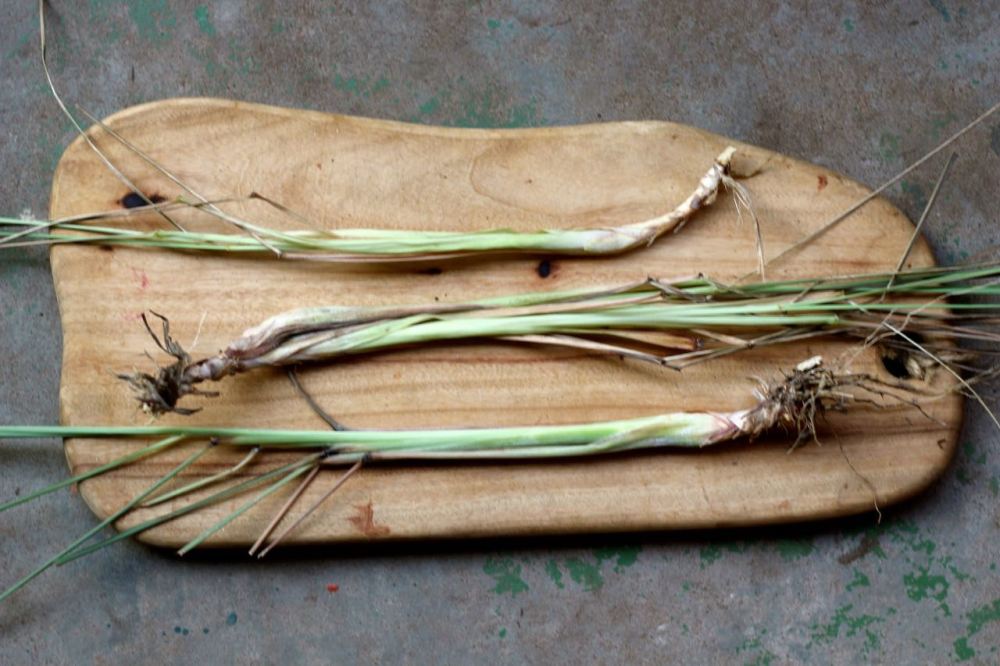 Yes lemongrass (Cymbopogon citratus) is a grass, in the grass family (Poaceae) which grows exceptionally well in the tropics, including here in Darwin. Lemongrass is one of the key ingredients in Laksa paste, and also features in many other curry pastes and sauces throughout SE Asia. This plant loves the wet season and being well watered and once established into a clump it makes a wonderful border plant, enjoying full sun. This plant grows easily when dived from the roots and then trimmed at the leaves and planted straight into moist soil.

Lemongrass originates in India and is full of essential oils including citral, geraniol and nerol. It contains vitamins A, B and C and is high in iron, chromium, magnesium. In Ayverdic medicine it is used for coughs, colds and it is a good digestive. This plant is also know as a good insect repellent. Research has shown it has anti-fungal and anti-microbial properties.

Ginger (Zingiber officinale) is a herbaceous perennial harvested for its zingy tasting root. Its leaves sprout up and its roots expand in the wet season and it dies back and becomes dormant in the dry season. You can grow more of it by dividing the root, harvesting some and replanting some, either straight away or after storing it.

Ginger is originally from China. The known history of ginger goes back 5000 years, and considered a tonic for all ailments in Chinese medicine. It is no lie that this is an incredible root and is used today as an inflammatory and an amazing digestive. Today India is the biggest producer of Ginger in the world and it is used in a huge variety of food throughout the world, from fermented Ginger Beer, to candied sweets, to clear soups and curry pastes including Laksa paste.

Galangal (Alpinia galanga) is also in the Ginger family (Zingerberaceae) and grown for its root. It is a taller more robust plant than Ginger, growing up to 2m and doesn’t die back as much in the dry season, but prefers a shady spot. Its root is more fragrant and has lighter smooth pink coloured skin. It is a very important ingredient in many soups and curries throughout SE Asia, including Laksa paste.

It is also an anti inflammatory and antioxidant and reported to support good brain health. Its red fruit are used in Chinese medicine and although less commonly used global than Ginger its roots are used in Russia to flavour vinegar and liqueur. Its leaves and young shoots are also edible. 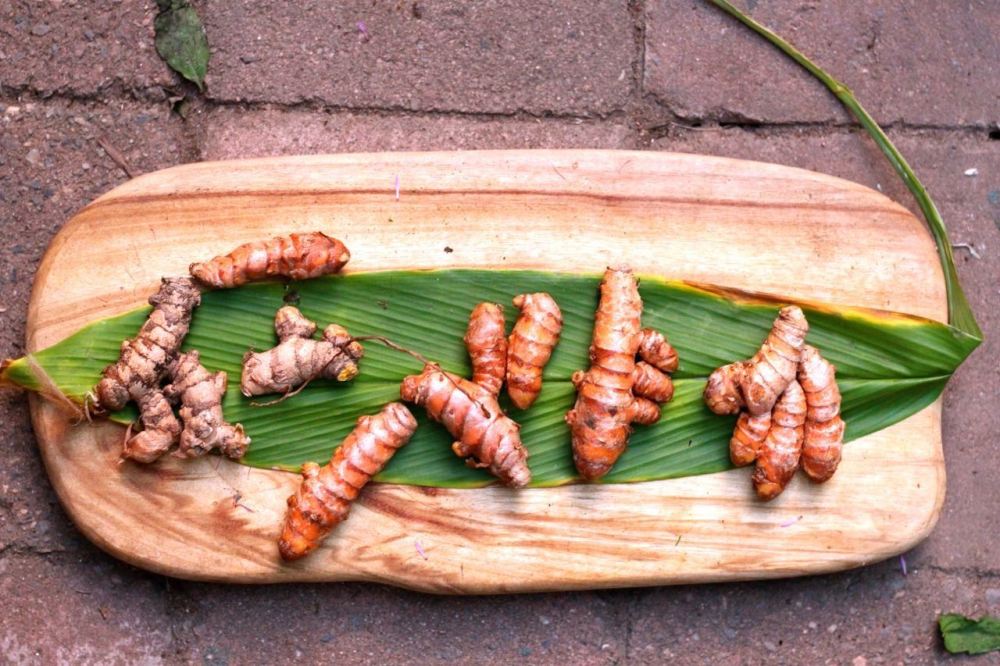 Turmeric (Curcuma longa) is also in the ginger family and native to monsoon forests of SE Asia. It is a perennial herb, popping up in the wet season and enjoying partly shaded areas. It grows really well in Darwin during the wet season and can be harvested throughout. A small part of the root can be planted and then will multiply. It is used in the Laksa paste and gives the soup its golden orange colour. It is used as a food and fabric dye throughout the world.

Turmeric really is a bit of a super food with so many medicinal qualities. It contains vitamin A and C, it is anti- inflammatory, a digestive aid, stimulates the glands and liver function and may also help prevention of altziemer’s disease. Its Active ingredient is curcumin; which is uptaken more in the body if eaten with peperine (found in black pepper) and oils, such as in coconut milk, so perfect in a Laksa. Wow- eating Laksa really does have some amazing benefits for health!

Torch ginger (Etlingera elatior), also in the Ginger family is known for its beautiful ornamental pink flower, which resembles a torch and grows easily all year in Darwin gardens, you may have seen it sold at many markets in bunches of beautiful flowers as ornamentals. It grows well in filtered sun ort part shade and enjoys water throughout the year, it does not die back in wet season, but flowers best with humidity. It is the flower bud, not the root that is edible and used in Laksa paste in Malaysia.

The beautiful pink flower is commonly used in Malaysian cooking, harvested and used when a flower bud. In many true Laksas it is used in the paste alongside galangal, for a delicate perfumed fresh taste and ginger will be omitted. This flower is known in Malaysia as Bunga Kantan. Its flower bud is an antioxidant and anti microbial when eaten; the benefits of eating Laksa just get better and better.

For ingredients added at the end………..

Saw Tooth Coriander (Eryngium foetidium)
This is a small clumping herb with serrated leaves which loves plenty of water and a shady or partly shady spot, loving our Top End wet season. This plant originates in Mexico and Central America and has a similar taste to the more widely known coriander plant (Corriandrum sativum) which it is related to (in the family Apiaceae). This type of corriander deals better with hot and humid temperatures much better and is best propagated by seed.

It is best finely chopped when used in cooking and in Laksa it is generally added at the very end as garnish along with your bean sprouts and fresh lime. It is used traditionally to heal stomach ache and fever and is a great addition to many dishes.

In Singapore and Malaysia this is an essential ingredient in Laksa and even is given the name “Laksa herb”, it is added into the Laksa at the end as a garnish.

This is a perennial creeping herb which loves to be moist and thrives in our wet season and is very easy to grow, it can even be grown in a pot in a pond in part sun or sun.

Sometimes this plant is called “Vietnamese mint” as it is commonly used in salads in Vietnam, however it is not related to mint (Lamiaceae family) it is in the family Polygonaceae family.

Bhuddist monks often grow this in gardens and eat it, as it is believed to repress sexual urges.

Coconut
Coconut (Coco nucifera) has to be one of the most widely used edible plants in the world, it is also one of the most widely spread too, found in all coastal regions of the tropics. Its seeds are dispersed and float across oceans. There are several varieties of coconuts, but generally they are tall palms and super easy to grow in the Darwin area, sprouting from their seeds before hitting soil. Coconut also is one of the key ingredients in Laksa, making the coconut milk that makes the source.

Coconut milk is made by grating and then squeezing the flesh of older fallen coconuts. Coconuts can actually be used at many stages of growth, from young drinking coconuts, to sprouting coconuts that can be made into flour. To be honest coconuts are one of the most important plants in the world and their husks (coir) are used as a fibre for ropes and mats, the dried flesh (copra) for endless processed foods and snacks and their leaves for everything from hats to baskets. They are full of energy, fat, protein and vitamins.

Thai Basil (Ocimum basilicum) is in the mint family and originates in India. This herb is a small perennial and probably one of the easiest and hardiest to grow in Darwin, especially during our hot wet season, growing into a small bush. This plant likes to be in full sun and quite well watered, it is easily grown from seed and often pops up on its own. This is one of herbs that can be used as a tasty garnish and adds a fresh aniseedy flavour.

This herb has many amazing medicinal properties, it is high in vitamin A, B and C and contains minerals calcium, phosphorous and potassium. It is an antioxidant and a digestive, ant-viral and analgesic. If you are going to grow anything to throw on top of your laksa, this has to be one of the healthiest choices. 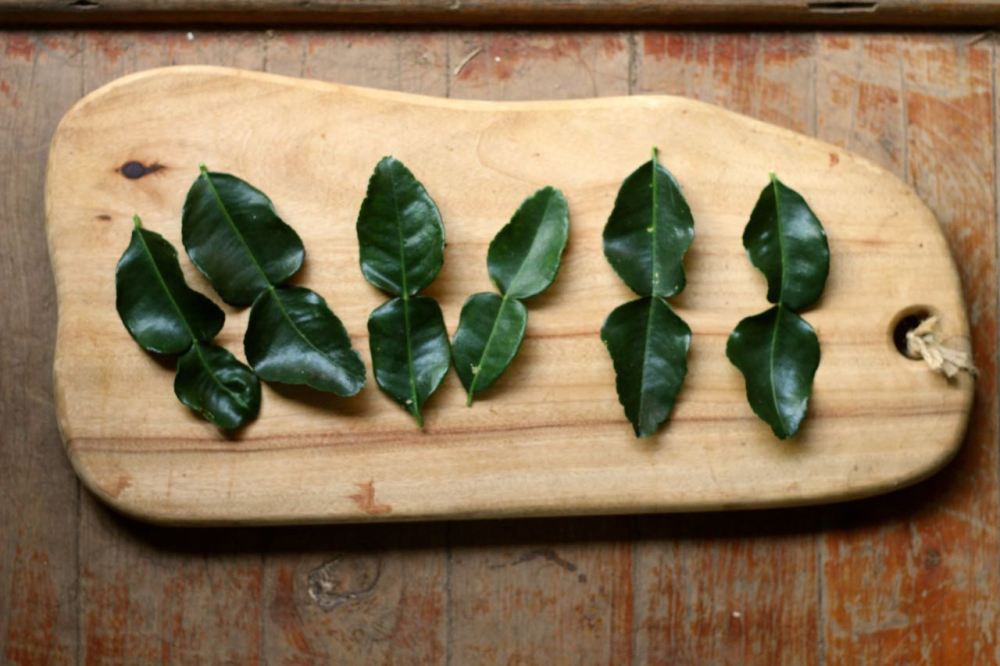 This is a small citrus tree that is primarily grown for its leaves, which are fragrant and used in many soups and sweets in South East Asia. Like many citrus trees, it enjoys good water and full sun and does very well in our Tropical climate here in Darwin.

In some Laksa recipes kaffir lime leaves are chopped finally and can be added to the soup at the end. To give a fresh tangy flavour, like adding a squeeze of lime. The leaves are high in essential oil and contain vitamin B and C. It is used as a digestive, antibiotic, antioxidant and be used for mouth ulcers.