OK, so I haven’t posted for ages, a combination of not being able to think clearly through the heat and being busy cooking and working on GULP (Growing and Using local produce) Banana projects, community worshops and more!

We try and use as much local food as possible at home and during the wet season this often means a lot of ingredients lending themselves to curries and Asian dishes. Now personally I could eat curries everyday, but for some people (like my partner) that is a bit much and he prefers some more, lets say European style dishes like pizza and pasta, oh and burgers!

So to appease the wish for food diversity, I created a burger meal- as local as possibly. It was inspired by the banana festival (which I will be writing about) and becoming the keeper of a whole bunch of very ripe bananas which I wanted to make into something for later and decided Banana ketchup would be awesome, and then pondered what would to go with it!

The chips are made from Breadfruit (click here for more breadfruit info)  which is a tree fruit and used more like a root veggie- it is a very beautiful (but large) tree. The fruit is starchy and pretty damn tasty! These chips were from firm fruit, cut into wedge shapes and par boiled and then coated in oil and baked in the oven until soft with a golden crunchy coating. This makes them more healthy (and just as yummy) as frying.

The burger is made from Buffalo that is very very free range- pretty much wild, from Gunbalanya station– just inside Arnhem Land, an indigenous enterprise assisted by The Indigenous Land Council and currently the only abattoir operating in the Top End. The burgers have been made at Fannie Bay butchers (A locally owned business at Fannie Bay shops).

The salad mix in the bun is a mixture of sweet leaf, Brazilian spinach, Thai basil, Pepper leaf and sweet potato leaf. There are some awesome greens to make up wet season garden grown salad mix. 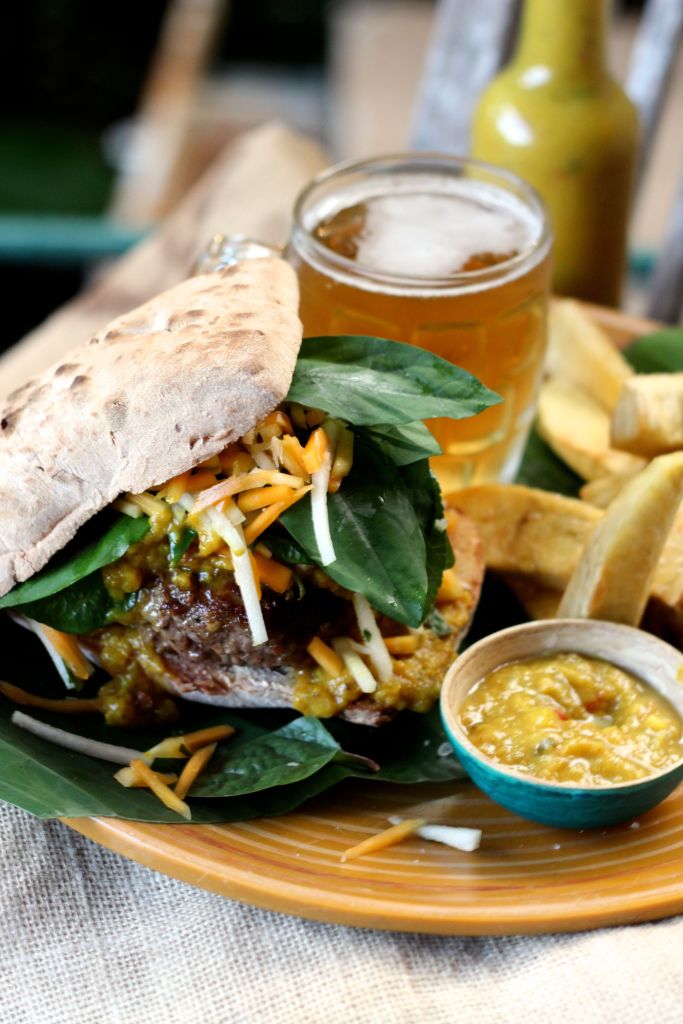 And finally the banana ketchup! Sounds crazy? Well apparently this became very popular in the Philippines, when there were many many bananas but a shortage of tomatoes! I rearranged a recipe that i found after tasting a version of this from a once only market stall at Rapid Creek Markets and thinking it was quite lovely! It involves onions, garlic, vinegar, honey, nutmeg, cloves and of course bananas and banana chillies. I will post the full recipe soon, so you can bottle your bananas or other local bananas before they disappear in the awfully unfair eradication. (more about that too soon)

There is a ciabatta  bread involved and yes we can’t grow wheat flour it is true, but the bread was made in Darwin and sold at Fannie Bay shops. I am trying to think of bread alternatives, and Kate has made a bread from Cassava, but a flat bread not a burger bun, so this may have to be from wheat style flour.

The obvious choice of beverage for this drink is a nice cold beer and luckily this is accompanied by some 99 home brew (locally brewed in Darwin, under our house using Alawa rain water from our roof), other beer ingredients obviously not from our roof- but hey the contents of beer is a lot lighter to transport without water!

The meal went down very well and bits were saved for later in the locally grown beard!