The Tiwi islands really are a beautiful place and our time with the rangers was fantastic. Amongst other projects we also visited another farm near Milakarpati, this community has a barge less often and so fresh food is not as regularly received  The farm is owned by Tiwi enterprises and supplies food to the shop at Milikarparti to supplement barged in veggies and is a wonderful initiative.

The rangers have a job of monitoring insect traps for the government Quarantine department, if anything is caught in the traps it is sent off for analysis and the traps are refreshed. The farm is mainly fruit trees, including star fruit, jackfruit, banans, mangoes, pawpaws and citrus. 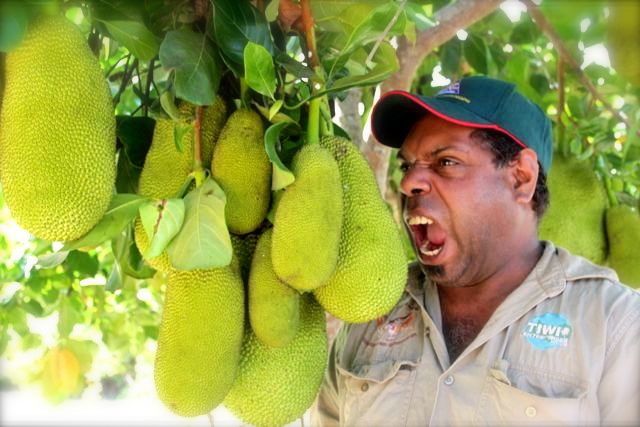 Above Des hangs out with the amazing and spiky Jackfruit. Also at the farm is a native plant nursery, which grows plants to re-veg areas that have undergone sand mining. For more info on “Farming the islands” click here.

With a combination of modern small scale farming and traditional bush tucker, the Tiwi islands strives towards more sustainable fresh and healthy food. Bush tucker fruits such as Billy Goat Plum, Bush Apple and Cycad are collected mainly by the women. There is  hunting of fish, Turtle and Buffalo (which was introduced with white settlers) and  Wallaby. While visiting Willy offered us some Turtle as a special a special gift. Now I would like to say, as I write about this that Sea Turtles are protected and only indigenous land owners have the right to hunt them, as they always have done. This bush tucker supplements other food and is encouraged to be done for special occasions.

The sea turtle was Green Sea Turtle and Des helped Roogan, our Nepalese colleague, cut it up and cook it up into a curry. We also cooked some on a hot plate over a fire. Traditionally it can be put into a fire in its shell. So we are were very privileged to try it and I spose I should tell you what it tasted like. Well I thought it was like a cross between kangaroo and fish, and the fat was really rich, too much for me! I don’t eat too much meat and cooked up a load of hot plate veggies to add to the mix!

The next day we went to a very special beach near to an area where many burial ceremonies have been done, we had a catch up chat about our experiences on the islands and the boys got some fresh oysters from the rocks! 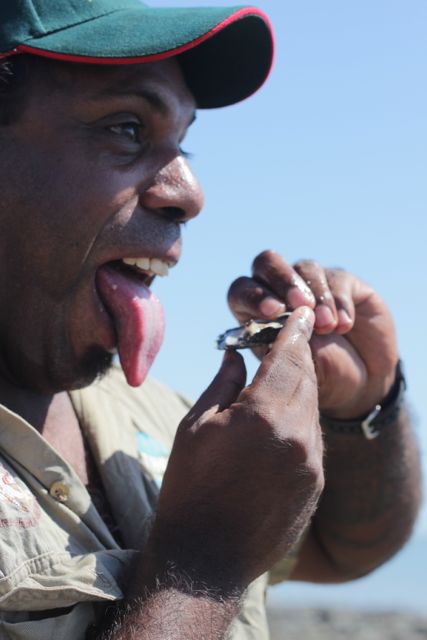 Art is also a very important part of Tiwi culture and Tiwi is home to some fantastic and well known artists. We visited some amazing art centres on the  islands where most paintings are done with a comb to make a series of dots.

Most paintings are done with traditionally made ochres and a specially made dot comb. There are art centres in all the ‘communities’ on the island and the ladies and men work on different projects, they are welcoming and friendly. Tiwi islands has Milimika festival coming up on 3rd and 4th August where people from outside the island may go and enjoy the islands for the weekend to attend the cultural and music festival. If you are interested have a look at Milimika festival website. You can get over there on planes, but there are no ferries running at the moment!

I would like to give a big THANK YOU to Willy Rioili and the rangers on the Tiwi Islands for sharing some of their country with us. Also a big thanks to Red and Mick from CDU who work with the boys! I hope to go back soon. 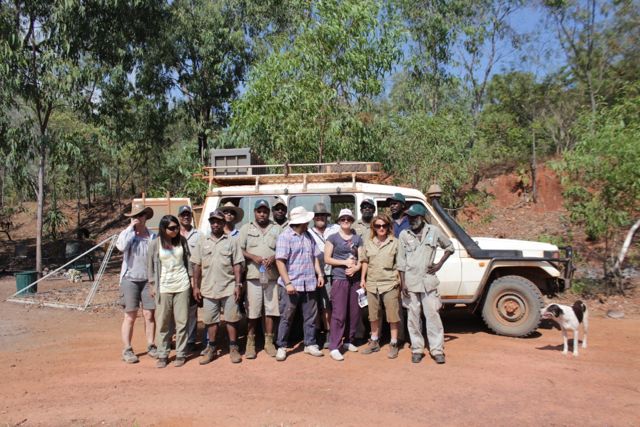